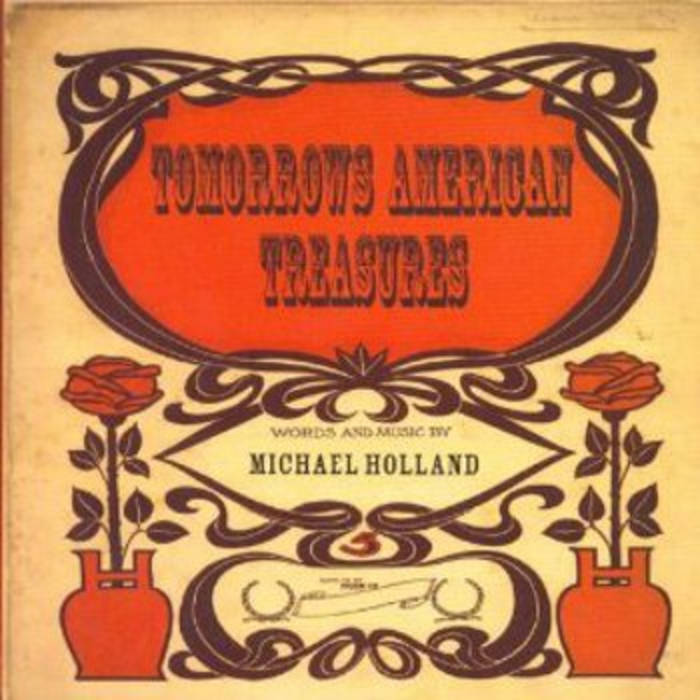 Michael Holland, though immersed in the heart and soul of American (cosmic) music, proves esoteric in the cogitation of his music. With Tomorrows American Treasures Holland employs the tools of classic American Appalachia, folk wanderlust, jazz's improvisational freedom, and poetic romanticism in this collection of songs that delicately caresses the depths of the human spirit. He uses archetypal imagery and language in conjunction with musical form in a way that fosters a contemporary relevance different from those of today's ill-pegged "freak folk" genre. His embrace of the historic provides a foundation and validity for his honesty and sensitivity to the human condition.
The Big Fat Gap bluegrass band, comprised of some of central North Carolina's hottest pickers and players, is perfectly suited for Holland's intention and their collaboration is dead-on in its execution and creativity delivered here. Mandolin and fiddle lend buoyant optimism to "Pretty Polly." "Crystal Meth Freak from California," a song I started my day with for about four weeks, delivers the mindscape of the "freak" and is marked by a most oddly befitting keyboard solo.
The familiar conjoined with the abstract is a construct Holland uses without fail, with the exception of the narrative "Look Out for King Heartache." "Lighten up Angel" gently summons the allure, tenderness, and tone of Van Morrison ("Into the Mystic") and exudes the thematic message and sentiment of assurance and hope-"Tonight we're sleeping under the bridges but who knows what tomorrow may bring." The record's unity is augmented by the intimacy of the close-knit, live recording. The perfectly mapped sequencing provides a connectedness that delivers a rejuvenation and awakening to the essential message of optimism and hope relevant in the record's entirety. There is a timeliness to Tomorrow's American Treasures that could be overlooked by the casual listener who might not recognize that this is not just another folk/bluegrass album. Michael Holland has succeeded in creating something rooted in the historic that has special significance in the now.
-William Bryson